In recent weeks, as many publicly traded manufacturing companies announced their quarterly projections, results have been mixed. Whereas General Electric expects an increase in earnings despite stagnating sales, others like U.S. Steel and Kennametal expect large hits to profitability, unable to overcome missed sales targets.
And a lot can be read from the numbers by comparing top performers to those losing out.
It is easy to see why these companies performed so differently when you take a closer look at their respective pricing power. GE recently leveraged a strong, executive-driven, focus on value management to raise prices, and their smart pricing policies allowed these increases to stick in the marketplace, offsetting the lack of sales volume growth. As SKP research from 2012 shows, pricing power can increase by as much as 35% when the CEO takes an active role in pricing. By contrast, U.S. Steel lost $73M in the first quarter and Kennametal experienced a 29% decline in profits, largely due to inadequate attention paid to value management programs while facing stiff competition.  Companies in these commodity markets tend to have lower pricing power, which can lead to profits that suffer by as much as 25%. And to boost profits, their focus has turned to cost cutting which, as the Pittsburgh Post-Gazette points out, will be difficult and comes with its own set of risks.
In this op-ed, author Stephan Liozu reflects on the projections, and challenges the executives of these struggling companies to take more control of their organizations’ value management programs. He argues that this approach serves as a more effective way to increase profits than cutting costs. 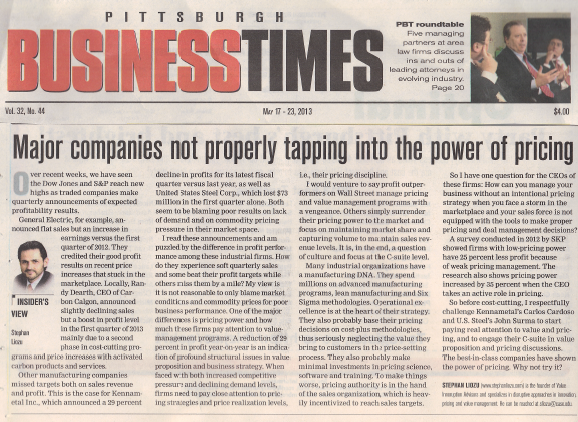