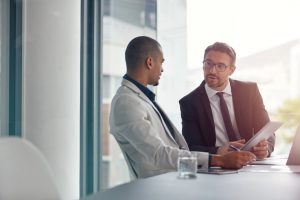 For our September Webinar, John Shulman shared strategies for elevating key skills across B2B sales teams using cutting-edge, interactive technology. At the end of the session, he answered questions from the audience. Here are his live answers:

Of the common problems you cite (lack of tools, lack of skills, wrong focus, lack of key relationships, which ones do you tend to come across most often? Which ones tend to be the easiest/hardest to solve?

I also do find that, especially if we have a range of skills within the organization, there may be different levels of comfort in how to communicate this stuff effectively. Some people just do it really well intuitively, and others really need some guidance and support on how to do it. And depending on the size of the organization and our ability to coach and identify these differences, sometimes we don’t necessarily support people in the ways we could.

The last thing I would say is that sometimes we get stuck, right? We get blocked by buyers or others at a customer where we really feel like we’re not able to communicate value to other stakeholders within the customer. That’s a real challenge that comes up quite a bit. There’s a lot of different strategies for dealing with that. But a lot of it has to do with understanding first and foremost, the interests of the buyer who may be blocking you in terms of protecting or managing their internal relationships. So if we can find ways to show that we respect those relationships and can help the buyer show value internally in their organization, it’s far more likely they’re willing to partner with us to start connecting with some of those other stakeholders in their organization.

In scenarios where a buyer is less focused on overall value, how can you shift the conversation to one where you can align them behind a value vision?

That’s a great question. So what you’re going to find, especially with professional purchasing organizations and professional buyers who have been trained, is they will either divert the value conversation and transfer it into more of a leveraged conversation where they are going to try to get all the value, but not acknowledge that it’s real life value. They’ll say, “yeah, we know we get that anyways, what’s the big deal?” And then they try to fight you on price. So that’s one situation that you come across very often. Another one is where the person you’re dealing with just does not see the value. It could be that they’re new in their position and they don’t get it. They lack the business acumen. It could be that their metrics are very different. So that basically they they’re measured on very narrow sense of a very narrow piece of the value.

And they want to ignore the rest of it. That’s very, very common, especially with purchasing organizations. The key that I’ve found is first of all, if you just try to fight it and go around them, it’s usually high-risk. I mean, if they find out, they get upset. You can damage relationships. The best approach that I’ve found is to figure out what interests – they could be professional or personal to person you’re dealing with – are really driving a lot of their behavior and acknowledge those interests directly if appropriate and look for ways to satisfy those interests. So it could be something as simple as the person’s super busy and they don’t have much time. So I’m going to focus on being very quick and concise and to the point and say, “hey, could I have just five minutes?” And in that five minutes, I’m going to make sure I show them how I can satisfy some of their interests and also, potentially, interests of others in the organization.

So instead of just saying, “hey, I’ve got a great value proposition,” or “we’re going to create a lot of value for your organization” or “here’s some numbers that we want you to look at,” focus specifically on identifiable critical interest of that stakeholder you’re dealing with. And that will usually get their attention, and then open the conversation to that broader value conversation. So again, it’s finding a hook, finding some way to get to that person so that they say, “Oh yeah, I could listen for a minute.” And the moment you’ve got their attention, that’s when you want to make sure that you’re going directly with your best stuff. It doesn’t mean that they’re going to say yes immediately, but you’ve now started a conversation that can evolve and continue and turn more broadly into a value conversation.

How many value differentiators are good enough to create a compelling value story?

So first of all, you don’t want to just overwhelm them with dozens of value differentiators. It’s not credible and it’s not realistic. They’re not going to respond. The precise answer is: as many value differentiators as you need to satisfy their critical interests better than the competition. That’s the actual correct answer.

As a practical matter, when I work with various sales organizations, what I’ve found is you’re generally looking for between three and five value differentiators. Why do you need at least three to five? Because it’s almost always the case that, unless you’re selling to just one person who is a sole proprietor, in any complex B2B environment, you’re going to have multiple stakeholders on their side who are probably going to have some interests in common, and a few interests that are different. So you may need one or two value differentiators that speak directly to one stakeholder’s interests, even if others aren’t so interested. So in that game we just played, I think you may recall that extra technical support was actually a critical value differentiator because it satisfied Chris, the operations guy, who’s worried about, having operational difficulties or changes if he goes with our new product, but it turns out, the purchasing person probably isn’t very excited about that at all.

Maybe she is even wondering, “oh, am I going to have to pay extra for that?” She doesn’t want that. So you’re going to need enough, usually three to five, to satisfy some of the big ones, but also a couple of little ones in there that you might need for certain stakeholders. And you always want to be listening to see if there are new stakeholder interests coming up that then make you realize, “oh, wait a minute. We do have another value differentiator that I could bring to play in this situation.” And remember, you always want to be specific to the targeted customer opportunity. So even if we have, let’s say, five to 10 total that we’re pretty comfortable with for a specific customer, it’s going to be closer to that three to five that you really want to be very credible.

In a competitive scenario, how do you best convey a value story when a key stakeholder prioritizes a benefit that is better suited to your competitor?

First of all, sometimes you’re not going to win them all, and sometimes the value differentiators in your analysis will tell you that this prospect is not the best opportunity. So one of the most powerful, important things you can do as a sales leader is to communicate clearly to your teams that they shouldn’t just keep knocking and pounding at the door where we don’t have a credible offering that’s better than competition. Now, most of the time, we believe we will have a very competitive offering and in fact be able to beat competition in many situations. So other than the situation where, it’s just the weird one, like I actually had one situation where the sales organization, the team I was working with had a great offering, but it turned out that the buyer was related to somebody who was married to somebody who worked for a competitor.

And for that reason, they were going to go with a competitor in that situation. We actually shared a cautionary tale, which was “okay, we get it. We understand you’re making a decision on that basis. That’s their value as they see it.” But we showed them that it was going to cost them a lot of money and their promised savings weren’t going to happen. And what actually happened in that situation is they listened to the cautionary tale. They preserved the opportunity to come back to us and they did come back later. So one thing is to be able to say, “Hey, you think that the competitors better, we disagree. Here’s our data. You have your data. Let’s talk about it, but just be aware that somebody else similarly situated another company that we’ve dealt with, another customer of ours had made this choice previously, here’s what they experienced.”

And again, you don’t have to be specific about who the customer is (and you probably won’t). But the ability to share information, engage in this dialogue about how you believe your differentiators are in fact, more effectively satisfying their interests. That’s what you want to focus on.

So finally, you may have other stakeholders in that organization who see it your way. Maybe the people totally agree with us and they don’t agree with the direction purchasing has been taken them. So there are a lot of different ways to get there, but it’s clearly about listening carefully, being very, very specific about what our value differentiators are, and engaging in a dialogue that may not always win the day today, but over time, in my experience, consistently will keep bringing people back to you because they realized 1) you understand their interests and their objectives and 2) you do have an offering that’s going to bring them certain, very powerful benefits. Maybe they recalculate as they keep listening and keep investigating. Don’t expect to always win every single one of them in the first interaction, but be consistent. That’s the key. You want your team, your sales team to be completely consistent.